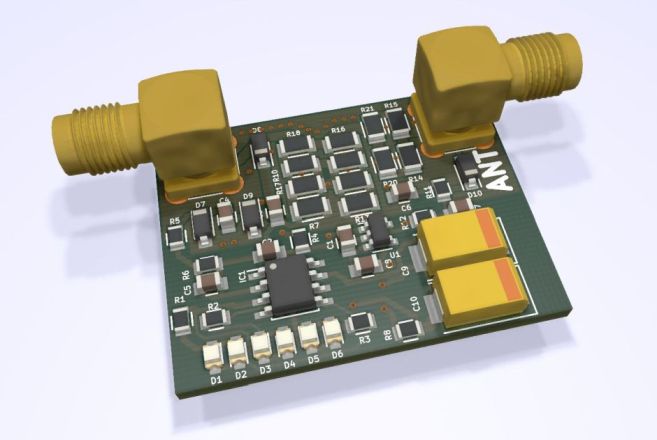 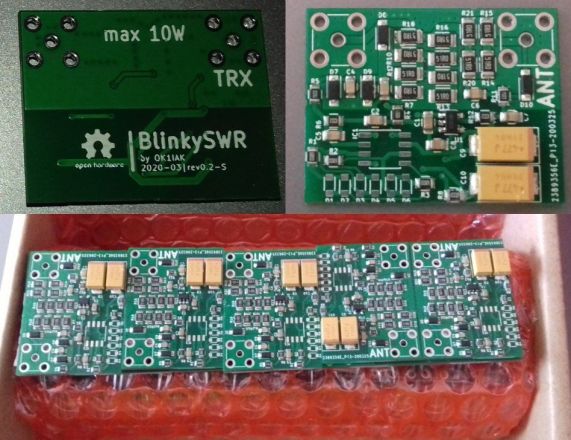 Circuit and firmware by Vojtech OK1IAK, printed board design by Dan OK1HRA.

The BlinkySWR is an accurate microprocessor based replacement of the famous Tayloe SWR bridge. As such, the SWR presented by the bridge to the transceiver never exceeds 1:2. The BlinkySWR was designed with a no-tuner or limited tuning range back packing antenna installations in mind, where a Tayloe SWR bridge may not reveal the true SWR. The circuit was inspired by the N2CX (SK) Rainbow Tuner, while being much simpler and self powered.

The SWR and power is shown by a 6 LED baragraph, where 21 discrete levels of SWR presented by interpolating intensities of neighboring LEDs, thus allowing for an analog-like SWR tuning experience. The SWR bridge electronics is powered by rectifying a tiny bit of the RF power. After transceiver key off, the measured transmit power is shortly indicated on the baragraph by discharging on board large capacitors.

The builder has to solder 6 SMD LEDs and SMD 8-pin AtTiny13A micro to the partially assembled board.